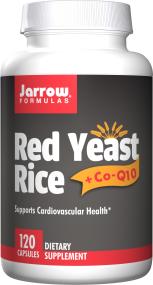 Red Yeast Rice + CoQ10 combines two complementary ingredients for heart and blood vessel health.* Included in this formula are a 10:1 red yeast rice extract that is carefully fermented to avoid the presence of the natural byproduct citrinin, and coenzyme Q10, which is both a critical componet in the production of bodily energy and a lipid-soluble antioxidant in its reduced ubiquinol (QH) form.*

What Is Red Yeast Rice?

Red yeast (Monascus purpureus) that grows on rice yields a fermented product known as red yeast rice (RYR). RYR has a long history of use in Asia as a food, a flavoring/coloring agent, and a preservative. In Chinese medicine, RYR is also believed to support blood circulation. RYR also contains a class of active compounds called monacolins. By current count, there are more than ten different monacolins found in RYR and they all appear to have slightly different effects.

But one should keep in mind that RYR is not a drug and is neither just one monacolin, nor a collection of monacolins. Rather, RYR is a complex food substance that contains many bioactive components like sterols, isoflavones, and monounsaturated fatty acids. Other specific compounds found in RYR, such as monascin and ankaflavin, have recently been found to promote inflammatory health and even support beneficial HDL levels.* The benefits of RYR to cardiovascular health are more subtle than is often described.* Those interested in RYR should also be mindful that any product they take is monitored for citrinin content. Citrinin is a mycotoxin that targets the kidneys and is produced by numerous Penicillium and Aspergillus species. It can appear in RYR not grown under carefully controlled conditions.

CoQ10 Is Your Heart’s Friend

Coenzyme Q10 (CoQ10) is chemically related to vitamins E and K. It is called ubiquinone because it is widely distributed in nature. CoQ10 is synthesized in all cells for energy production, and serves as an antioxidant in membranes. Its role in energy production holds special importance for the heart. The heart and other active muscle tissues are spectacularly endowed with mitochondria (subcellular furnaces), where CoQ10 promotes fat and carbohydrate breakdown to produce more than 90% of our energy. CoQ10 facilitates electron transfer within mitochondrial membranes to produce ATP, the body’s energy currency.* Concern about CoQ10 levels is especially important in this day and age, because cholesterol-lowering drugs (statins) work by inhibiting an enzyme that is also responsible for CoQ10 biosynthesis. As a result, anyone taking statins may have reduced levels of CoQ10. Jarrow Formulas actively contributes to research on CoQ10.